Skip to content
Previous Next
What Episode Does Rick Get the Red Machete?

What Episode Does Rick Get the Red Machete?

What episode does Rick get the Red machete? The small red machete arc in The Walking Dead is a plot line that I really like in that it ends on such a high note for Rick Grimes and his people. The arc starts out shortly after the prison has been completely destroyed by the Governor’s people. Rick manages to get his hands on a bag of weapons, that he lists once they are trapped, and in a terrible situation over at Terminus, a group of horrible people within the show. The coolest foreshadowing within the Series is when Rick Grimes and his people are completely trapped, and it appears there is absolutely no way out for them. Rick lists off the weapons that he has in the bag he hid, ending with “and a Machette with a red handle. That’s what I’m gonna use to take you out with.” This ends with one of the most badass scenes in all of The Walking Dead, in which Rick says “besides, I already made you a promise” before taking the guy out with the machete. And so, the red machete gives way to one of the absolute most awesome scenes in the show, more explained within the blog post.

How Does the Red Machete Tie Into the Walking Dead?

The red machete is first mentioned when Rick and his people are tied up by the terminus gang, a group of ruthless savages that they eventually go on to beat and take out completely, with some massive help from Carol and Rick in the process. Rick first mentions it when they are tied up, and he says, 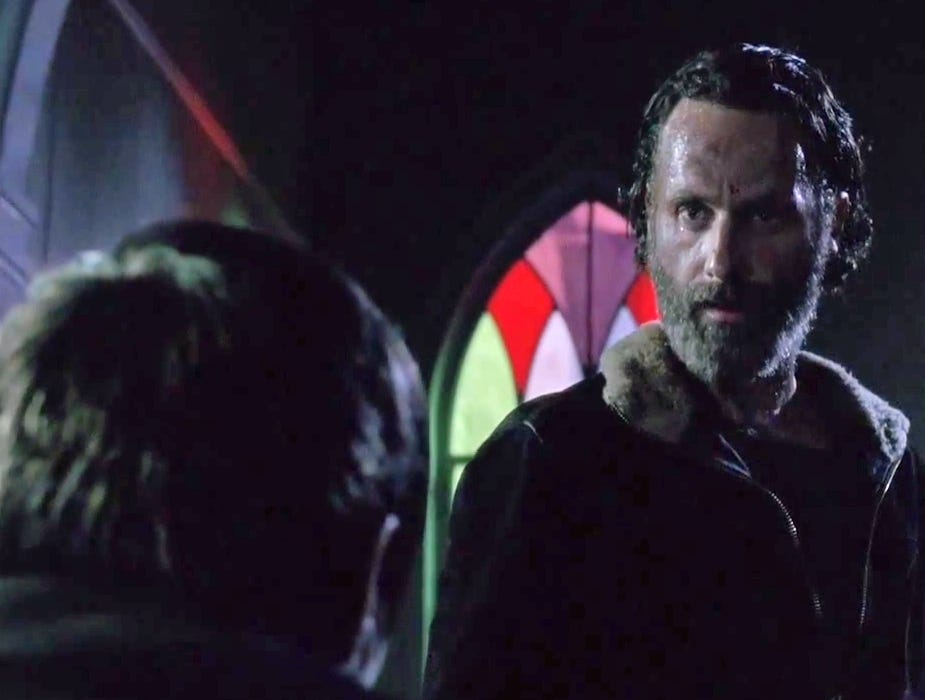 after listing off the weapons he has “and a machete with a red handle, that’s what I’m gonna use to take you out with” an awesome scene for sure! What puts the icing on the cake from here and really makes the scene worthwhile is when they go to take out the remaining Terminus people due to them attacking their friend Bob. They leave to go get them, and they sneak in to trap their remaining people (the weaker ones) to gain leverage.

Rick, Abraham, Glenn, Sasha, and the rest of the group with strength and power all come back just in time and take out each and every one of them. Rather than shooting them right off the bat however, they corner them and put them on their knees. From here, the guy says something like “you could’ve shot us when you came in, there must be a reason for that.” Rick says “we didn’t wanna waste the bullets.” The guy begs and Rick says “but you do this to anyone right, that’s what you said. Besides, I already made you a promise” before he pulls out the Red Machete and cuts him down! It is such an awesome scene of triumph it makes you want to hit the gym and smash some weights.

The Awesomeness of the Red Machete, One of My Top Five Favorite Scenes in The Show

The badassery of this scene is among the top five in the show, and it is definitely in my all time favorite scenes from TWD. Ranked in order, my favorites are:

Any comments on these comment down below, I’d love to hear what awesome scenes I missed.

Final Thoughts on What Episode Does Rick Get the Red Machete?

This would be in the early parts of Season 5. Once the group is able to take out Terminus they proceed on to safe haven, which would be Alexandria. From here, their lives get significantly better and the show gets a bit more wholesome. What do you think the top scenes in The Walking Dead are? Comment down below and be sure to subscribe for additional information on all things The Walking Dead.