Skip to content
Previous Next
What Kind of Gun Does Rick Grimes Have?

What Kind of Gun Does Rick Grimes Have?

In this blog post, I walk through the type of gun that Rick Grimes uses in The Walking Dead, which is a variation of the python pistol from Call of duty, and will explain why it is such an effective weapon, since it is a one shot kill’s headshot for just about anything nearby. This is a very heavily search term on Google, and it is something that I really have considered writing about for a long time, as one of the first published blog post for my new walking dead topic blog. To make a long story short, I Think the gun that Rick Grimes uses is a perfect fit for The Walking Dead, and in this blog post I’ll explain everything about the weapon and the best scenes it’s been used in.

So the first appearance that I know of where Rick pulls out this pistol, would be in season one episode one of The Walking Dead, when he first sees a zombie as he is coming out of the hospital. At first he thinks it is a sick woman, and tries to turn her around and assist, before he sees that is no longer 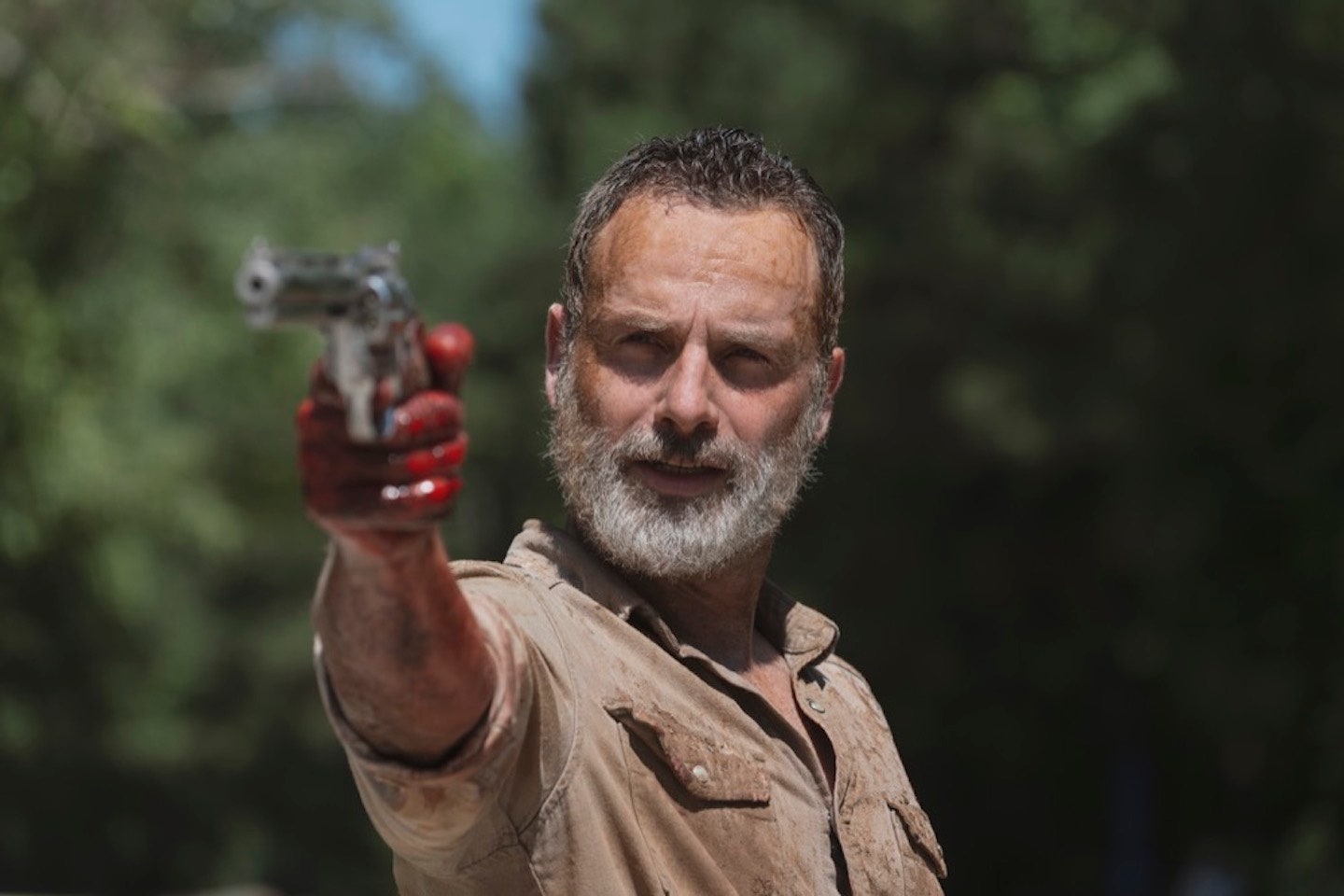 a human, but instead just simply a walking corpse. He uses the pistol to shoot the zombie in the head, and the episodes that follow he would do the same thing multiple times over and over again.

I’ve always found the weapon that he used to be extremely fascinating, as it is a variation of the python pistol from call of duty. The exact name for the weapon that Rick Grimes has in TWD is the Colt Python, which is a 357 Magnum revolver that he had used since back in his police days. With regards to similar weapons you may have seen in the Call of Duty Franchise, the weapons Python, Cobra, and Executioner come to mind as far as similar guns.

My Favorite Scenes With The Rick Grimes Colt Python

My all time favorite scene with this weapon in the Walking Dead so far is at the end of Season 9 where Rick Grimes if forced to shoot the TNT on the bridge in order to blow the bridge and take out the gigantic hoard of walkers. Notable mentions in my favorite scenes featuring this weapon are when Rick takes out Shane, when Rick says after the farm goes under that this is a dictatorship now and that everyone will listen to him and he is swinging it around, when Rick goes on a zombie killing rampage after Laurie dies during pregnancy, and when Rick Grimes is in savage mode shortly after his stint in Alexandria and is swinging his weapon around. The Colt Python is now among the most iconic weapons in the show, and is definitely my favorite by far, its kind of an old western Walker slaying machine.

It is a Colt Python, the old original one, to my knowledge it never leaves his side through all this time and instead is sort of Rick’s saving grace for much of the show. How he’s able to find a large amount of the specific types of bullets for that specific weapon is beyond me, but I guess they’ve been out hunting and have picked it up along the way. The final scene so far with this powerful weapon is when Rick is at the bridge killing the hoard and taking out the TNT.

Final Thoughts on What Kind of Gun Rick Grimes Has, My Opinion On Its Effectiveness

So, in short, its a Colt Python. And it’s kept Rick alive and strong for all this time so I’d say its a pretty effective weapon. I wish they would have had Rick in Season 10 of the Walking Dead, but it looks like we’ll still see him in the Walking Dead Movie coming up soon, and man am I excited for that. For more information on all things Walking Dead and for discounts on TWD comic books, read on or subscribe to our blog for additional details and information.