There was an official Youtube video that walked through exactly what the top ten voted scenes with Rick Grimes were, but I have to say that I somewhat disagreed with the top 3 scenes on this one, and I think that these could be re-ordered. And so, in this blog post, I’ll give my top ten listing, in order of 10 to 1, of the 10 most badass times that Rick Grimes has in the Walking Dead, and the times that Rick was forced to go on the offensive and harness his inner Warrior Archetype to its fullest, most savage extent. Read on or subscribe to our blog for additional details and information.

My Top ten moments are as follows Below:

10. Rick Rebels on The Walkers After Lori’s Death 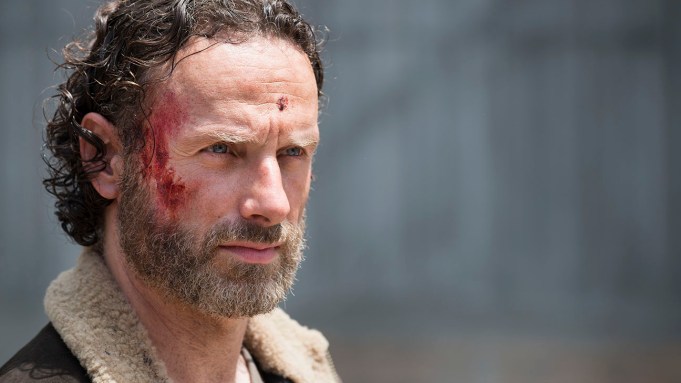 This is an awesomely intense scene, and even with how devastatingly sad it is, it still finds a way to be completely badass. In this scene, Rick Grimes loses his beloved wife Lori Grimes during her pregnancy. Rick, in order to take out his anger and aggression, goes into the prison that they are living in, and takes out a massive amount of walkers in the pitch black darkness. Even scarier than this is when he does all of this without saying a word, even when one of his close friends Glenn goes in to check on him, and he slams him against a wall in anger.

Aaron was the abusive husband of Jesse, an infatuation and mild love interest of Rick Grimes in the Walking Dead. After beating him up the day prior to this occurring, he finally gets the green light from deanna after he attacks her husband, Rick takes him out inside of about 2 seconds, while his face is covered in blood from taking out Walkers, a savage moment indeed.

8. Rick Takes out Shane to Protect his Family

An argument could definitely be made that this should be higher up on this list. In this scene, Shane has started to lead Rick Grimes out into a field to take him out, sleep with his wife, and take over his family. The one thing that I like about this show is that everything they have Rick do is somewhat wholesome, and that even though he is a warrior that takes people out on a pretty regular basis, he only does so in protection of his family. We see other characters, such as Shane, the people from Terminus, or Negan, do so for much more nefarious purposes.

Rick getting in the Terminus guys face when he has him completely trapped is one of the coolest things ever. He basically says “And a machete with a red handle, that’s what I’m gonna use to take you out with” while looking the guy dead in the eye, even though the guy from terminus has him completely surrounded and immobilized, an awesome scene indeed!

6. Rick tries to take out Neagan by Himself

There is a scene in the middle of Season 8 where Rick tries to end the war against the Saviors early by taking out Negan. He follows Negan into a dark room and tries to take him out, walking past Walkers like they weren’t even there. He goes after Negan and fights him by hand, nearly beating him even after running out of all his weapons.

This is a bold scene, however Rick makes a kingly decision after this to keep Negan alive. This would both turn out to be a smart strategic long term decision for the group, as we see Negan now thriving in Season 11 of the show, but also even more masochistic than Maggie who wanted to take him out completely, as Rick basically tortures him in a cell for 7 years.

Argument could be made for this to be higher up on this list, however I just can’t see moving it up because the other 3 are so legendarily awesome! In this scene, Rick fulfills the promise he made to the terminus guy when he had him completely trapped, and takes him out with the Red Machete (yes I am using takes him out instead of the other word for this at every chance I get on this blog because I am not trying to have compliances issues from affiliate programs, I’m writing this blog to try and make money after all.) In an amazing display of triumph, just when the Terminus guy thinks he is in the clear, saying “you could’ve shot at us when you came in, you didn’t there had to be a reason for that.” Rick just says “we didn’t want to waste the bullets. And besides, I already made you a promise.” Before he takes him out with a Red Machete, an awesome scene indeed!

3. Biting out the Guy’s Throat to Save his Loved Ones

This one again, could easily be number one on this list, it is definitely the most savage, if not the most badass. Rick is completely cornered in this scene, his son Carl is being attacked, his best friend Daryl is also being attacked, and his future wife Michonne has a gun to her head….Rick is also still injured from the Governor and has been out on the road. He is indeed exhausted, and is put in a bear hug eventually by the guy in charge who says “what you gonna do now?” Rick bites the guys throat extremely hard, taking him out. The bold move scares the other people that are attacking so much that Daryl gets some good shots in, and Michonne is able to turn the gun on the guy that was attacking her. From here, the only guy left is the fat guy that was attacking Carl. While Michonne tries to reason with him, Rick just says “HE’S MINE” and walks over to him, scaring literally the hell out of him, and walking over and taking him out. He continues attacking him even after he’s finished just out of pure rage.

2. Rick destroys the bridge to defeat the herd

This is more of the old kingly Rick Grimes versus the pure warrior Rick like we see in the above paragraph. In this scene, Rick is trying to lead the Walkers away from the communities to save them. Rick eventually leads them to the bridge and takes them out with TNT, it is Rick’s final scene in the Walking dead, and he surely goes out with a bang.

This is my favorite one by far, and I have seen this one about 50 times at least. In this scene, Carl Grimes has just been shot, and Rick and Michonne fight off walkers taking him to the infirmary. He brings him in, saying to the nurse “please save him” before putting him down on the surgery bed. The light starts to attract the zombies, and so Rick, with nothing he’s able to do with the surgery, decides to defend the surgery room, taking out his aggression and anger in the process. He walks out into the middle of the herd and begins to take them on all by himself, this inspires the other Alexandrians to do the same, and they eventually beat them all by morning.

And so, those are my top ten Rick Grimes moments in the show The Walking Dead. Think I’m pretty spot on here or do you have a different opinion of scenes that I might have missed. Subscribe or comment down below to let us know.