Why Rick Grimes Is The Best Character In The Walking Dead

The reason why Rick Grimes is the best character in The Walking Dead is his fears tenacity, his uncanny ability to push through massive amounts of horrible situations and always come out a stronger man on the other side, and because of his dash and good looks while doing all of this. Rick Rimes has been an extreme inspiration to me over the last two years, as ironically I started getting into watching The Walking Dead during the coronavirus crisis. The way that Rick Rimes was able to push through certain things in his life, whether it is Carl getting shot and having to run him half a mile to a farm while giving blood for safekeeping, whether it was beating an entire horde all on his own in order to save his son, or a host of other issues, Rick Rimes always pulls through in the end. And so, in this blog post, I will walk through exactly why Rick Grimes is the best character in The Walking Dead, and will give my top 7 scenarios where he’s been an absolute badass and has been forced to pull through.

The first one on my list is the time that they were attacked by the gang, and Rick Rimes was forced to bite out the guys throat in order to save Carl, Derell, and Michonne and their lives. I missing, they each have guns to the back of their head, it looks like there’s absolutely no way out. Rick completely turn the tables and whites the guys throw it out, scaring the other attackers, and letting his group attacked them and take the lead.

My second favorite one is the time where he saves Carl’s life and gets rid of the horde in Alexandria. In this one, Carla has just gotten shot in the eye, and yes this is the second time he’s gotten shot in The Walking Dead. Call would be shot a total of three times throughout the show, with the last bullet being his final one. In this scene, Rick once again picks up Carl’s body and drags him to the infirmary, having our legitimate hospital there in Alexandria, and he gets him into surgery. Thinking like a pro, and realizing that there is virtually nothing he can do on the surgical table, Rick Grimes takes his aggression out where the zombies are, and Starts to attack them, not only because there’s a way to defend the hospital bed his son is in, but impure aggression in at the anger at what they have done to him and his family. In typical Rick fashion, he’s able to take out the entire heard and to inspire the others in Alexandria to fight with him, while they clear out their entire landscape beating the herd down completely.

At number three we have Rick Grimes taking out Shane. Once again and him fighting for his family, and while this is kind of a controversial scene, because people didn’t necessarily like the story arc of Shane going crazy and wanted to keep Lori and Carl for himself, I find this as a pivotal scene in the show, in that Rick is able to push through and fight against all odds.

I have number four as Rick saving the bridge. This is a pretty bad ass scene, because at this point Rick and Derell are like brothers, and they are fighting. They get themselves out of a jam, only to realize that a herd of walkers is heading towards Alexandria. He tries to stop them from moving 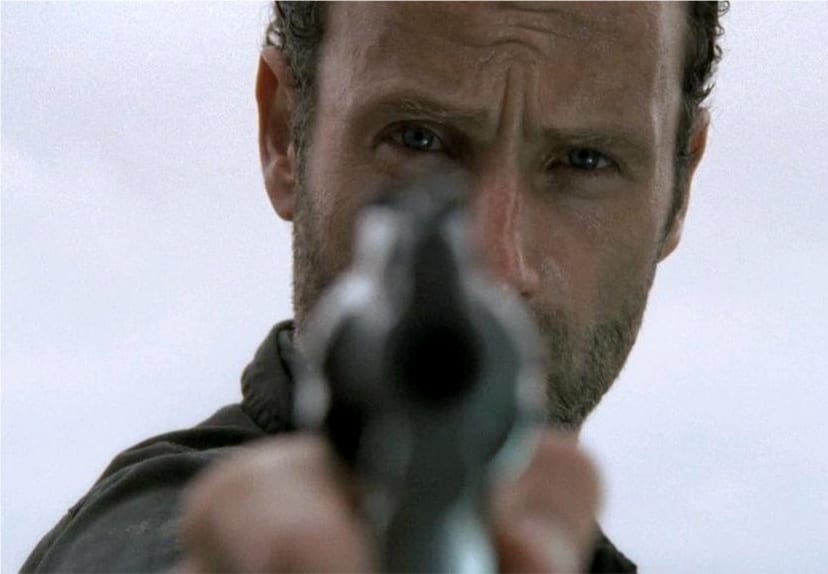 towards hilltop in Alexandria, and he does so by taking the horse and trying to lead them away. This somewhat backfires, as he is thrown off his white horse, and is thrown onto a piece of rebar, that gets jammed into his side. In probably the most painful and tough situation in the entire show, Rick is forced to out run the herd practically on foot while scrambling every second of the way, as he has a piece of rebar in his side and he’s bleeding out profusely, probably about to die. Rick makes it to the other side, takes out the bridge and destroys the horde, saving his community.

Rick getting saved in a helicopter is number five for me. This scene goes without saying as it is filled with a lot of triumph, and it is some thing that although it’s not showing Rick Grimes necessarily fighting, it is a moment of victory for him as he gets to the other side.

Taking the prison is what I would call number six for Rick. His insight that showed him that they can live out in the prison, although he had a horrible time there and was probably one of the worst seasons of the show, showed his determination and that he’s willing to do anything humanly possible to keep moving forward and make it to your side.

Taking out the guy at terminus is what I would put it number seven. At this point in the show, the gang is living in a church. They had just escaped terminus, and met a priest and are staying there for safe haven. What they find is that the people from terminus have taken one of their own and are about to destroy him. They soon come back to the church to find them there, low off one of the guys fingers, and get them lined up with guns on their head. Rick ends the war in an amazing fashion, and that he fulfills his deal with a red machete, and takes out the leader.

And that’s a little snippet of my two sense on why Rick Grimes is the best character in The Walking Dead. Overall Rick has been a fantastic influence on me and watching certain scenes in the show is really giving me motivation at difficult times in my life. Keep reading for more information and all things The Walking Dead.